Generally in the network cabling, outdoors (connection between buildings) use fiber optic cables, while indoors (inside buildings) use Ethernet twisted pair cables. Then how to convert the transmission media between the Outdoor Optical Network and the Indoor Ethernet Network?

And what devices are used in the connection? What roles do they play? How about the relationship between them? The answers are as following. Firstly, the mainly used devices are fiber terminal box, fiber optic patch cable, fiber optic pigtail and optical transceiver module etc.

Tips: There are many network devices which have optical ports, but if there is no optical modules (similar to the fiber optic transceiver functions), the ports can’t be used.

Optical Pigtail: connector at one end and the other end is a cable core breakage. By welding, is connected with the other cable core. It often divided into single-mode or multi-mode fiber pigtail, single fiber or dual fiber, transmission distance, as well as pigtail interface type. Commonly used in fiber optic devices currently on the market pigtail interface types are generally: FC, SC, LC, ST these four. 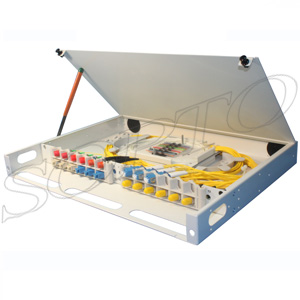 The role of fiber pigtail is mainly used to connect both ends of the connector, pigtail splicing fiber optic connectors at one end with the other end through a special connector (FC, SC, LC, ST) with fiber-optic transceiver or optical module is connected, constituting the optical data transmission path. Where FC and FC connectors generally used in communications transmission equipment; ST connectors are generally the first coupler adapter, and then connect to fiber optic transceiver modules.

Fiber Optic Patch Cable: Its two ends are both active joints. It is used for connecting fiber optic pigtails and devices. It has thick protective layer, and is commonly used in the connection between optical transceiver and fiber terminal box. It is also called fiber jumper or fiber optic patch cord.